Are guns the problem? It's time to have an honest conversation. https://t.co/WhTJyQE9HQ

Kentucky’s governor Matt Bevin gave a short interview to the Cincinnati Enquirer about the issue of guns in America. Below is the CC transcript of the interview from YouTube. (Hence the lack of punctuation.) I’ve broken up the text at relevant points to make space for commentary and I also corrected a few obvious auto-translation errors and filled in a few gaps in trying to make sure all of his ideas were represented fairly. The text has not been otherwise altered. (My comments below are all in italics)

Interview text:
00:07
again here’s what I’ll say I mean a hundred years ago and even fifty years ago we had more guns per capita in America than we do now it’s not a gun problem guns in these instances have been involved clearly guns have often been involved when people have lost their lives but the reality is it’s not a gun problem it’s not having too many guns there used to be more guns per person in America than there are now

Here’s the % of the population owning firearms. (Yes, it is going down, but this isn’t what he referred to.) Here’s the % change in the number of firearms in the US from 1993-2013 (It’s not the 50 or 100 years that governor Bevin referred to but given the trend in this graph, and this WaPo article that suggests 2015 was the first year in which guns outnumbered humans in the US, I think I’m on solid ground) 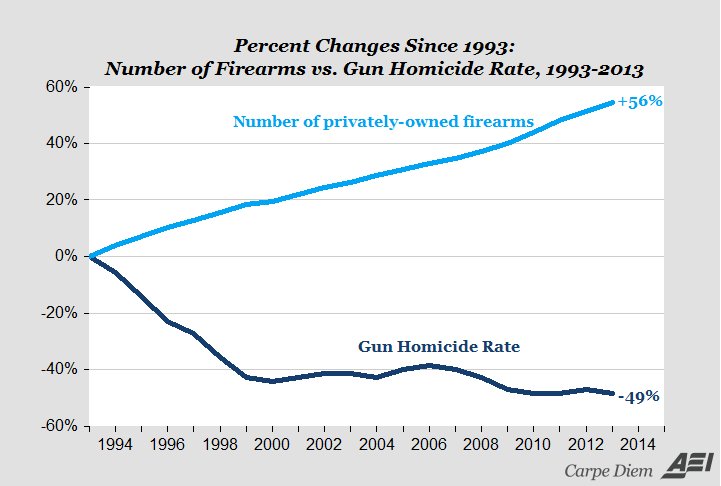 The outcome of these trends is the concentration of more guns in fewer homes. but children did not go to school and kill other children when I was a kid especially after Christmas people brought their guns to school my friends get a new shotgun get a 22-ton he’d come to school and show it to your friends it was supposed to stay outside in your truck which may or may not have been locked but kids would bring them on the buses sometimes they would be in kids lockers nobody even thought about shooting other people with it so it’s not a gun problem
00:55
what I would say to those for whom that is the solution get a new idea because that is not the solution it is a cultural problem we have a culture that is desensitized to death that is desensitized to the value of life and we celebrate death through our musical lyrics we’d celebrate death through video games that literally reward you with extra points for going back and finishing people off I mean it is horrific and it is graphic increasingly realistic the television shows that now are even on prime time movies again these are things that have long existed but the degree of specificity the graphic nature of them the encouraging of people to participate in the form of videogames and then the belief that none of this is connected to what we’re seeing give me a break we’ve removed any responsibility from the homes and from communities from schools and from churches from things that once were the background and that in the in the foundation of the mores of a nation we’ve told these people to keep a lid on it keep that in your own mind so we’ve removed any sense of right or wrong we’ve infused that with a whole lot of do whatever including taking human life and then we’re shocked when people do it we got to grow up here in America we got to be serious about the fact this is a cultural problem and in America at every level from the homes that we live in to the White House and everywhere in between we need to have a frank and honest dialogue about the cultural reasons for young people killing young people

02:25
it’s not the gun because they could just as easily run kids over while they’re waiting in line to get on the school bus
02:30
what is the mindset that’s causing young people to kill other young people that’s what needs to be then go back before any of these additional how many children walked into schools and slaughtered other children how much more evidence do you need you have 17 more dead children in Florida we had a couple dead children a few weeks ago here in Kentucky how much more evidence do people want the people who say there’s no evidence are full of crap frankly and are using that as an excuse to not address the fact that we have plenty of dead bodies of our children that are the evidence I don’t know how much more anybody needs again let’s start a dialogue again the most important thing back to the beginning of your question not to have any knee-jerk response the idea that we need to do this or to do that this rule or that law that is not the answer and mistakes are made with people with good intention in moments of emotion rush to judgment let’s start an honest conversation about what is or is not appropriate to be infusing into our
young people and I’m a big believer in the Constitution in the First Amendment
in the right to free speech but there are certain things that are so graphic as it relates to violence and things that are so pornographic as well on a whole nother front that we allow to pass under the guise of free speech which arguably are but there is ZERO redemptive value there is ZERO upside to any of this being in the public domain let alone in the minds and hands and homes of our young people
04:08
we need to have an honest conversation about what should or should not even be allowed in the United States as it relates to some of the things that are being put in the hands of our young
04:19
I mean this is let’s start a conversation up one person here one person there’s not one person not one person who has it all figured out nor is there a perfect solution because evil exists and don’t kid yourself what you saw was evil but I’ll tell you another thing too as long as we’re talking about this we talked today about a company that’s looking at the pharmacodynamic effect of certain drugs in the pharmacogenomic effect of certain drugs every human being has a different physiology and you look at the number of children that have been involved in these shootings who are on some kind of psychiatric drug go watch a football game go watch a basketball game I don’t care what they’re advertising it could be for constipation it could be for PTSD it could be for anything in between you listen to the little disclaimer at the end how many of them have very specific warnings about suicidal thoughts the thoughts of self-harm the thoughts of depression these are the catalysts for some of what we’re seeing in these schools let’s not kid ourselves if we fail to talk about that by having knee-jerk responses about more rules needed for this that of the other things we are intentionally misleading ourselves and that is a mistake there will never be a perfect solution for keeping evil in a box but we can be a lot smarter by talking about the societal impact of encouraging certain behaviors that have absolutely no upside for America

In sum, he opens with incorrect information about the prevalence of guns, makes a load of accusations without presenting any facts, and then suggests that we should start a conversation for a problem that has gone on for decades. Sadly, I’m guessing we’ll hear him make that last claim again soon. Hopefully, we’ll demand different this time.

Governor Bevin was proud enough of this interview to share it on his Twitter feed, but he may eventually change his mind on that maneuver. Just in case, here’s a direct link to the YouTube video.
Categories: Politics
Tags: AmericaAR-15Gunsviolencewicked problems

I’m not certain of much in life, but that Donald Trump is a disgrace who is in over his head seems pretty unquestionable. The London terrorist attacks were yet another chance for him to show Read more…