The Brexit Signal is Lit

Theresa May became Prime Minister in the wake of the EU referendum that was held on June 23, 2016. The results of that election sent former PM David Cameron out of office in disgrace. A week later, May made her first public statement in which she claimed there would be no early election, a claim that has frequently been repeated.  The claim was reiterated in September and October of last year, and twice in March of this year. The most recent one was unequivocal, “There is no change in our position on an early general election. There is not going to be a general election.” These claims were all made at a time in which confidence was high for the Tories as the snap election option was kept neatly in the back pocket.

Theresa May called for snap elections today in an unscheduled appearance outside Number 10.

In her appearance, Minister May confidently stated, “Britain is leaving the European Union and there can be no turning back.” She stated that she had not called for an election sooner because “Britain needed certainty, stability, and strong leadership” in the wake of the EU referendum. Now is apparently a better time, but as Owen Jones notes, May recently told Scotland that now was not the time for a second Scoxit referendum. She further claimed that economic growth had “exceeded all expectations,” record numbers of jobs had been created (I feel like I’ve beaten this dead horse enough) and that consumer confidence remained high. (We’ll get back to that.) May also noted the need for an election to consolidate power to ensure smooth negotiations.

I don’t buy any of it. If you ask me, I think they’re in deep trouble.

The UK officially triggered Article 50 on March 29. Since then all signs have pointed to protracted, possibly problematic negotiations, with the UK’s likely end choice being between accepting a bad deal with the EU, or no deal at all (a likely far worse option).

EU negotiators have refused to start negotiations on the go forward deal until the “divorce bill” is agreed, and the latest news has the UK set to lose two major EU regulatory agencies within weeks.  A UK Brexit spokesmen responded to that announcement stating, “No decisions have been taken about the location of the European Banking Authority or the European Medicines Agency — these will be subject to the exit negotiations.” Can you even imagine?

The response to the regulatory announcement fit in well with the UK’s posturing around the negotiations in general. Their position is that the EU sends more of their absolute GDP to the UK then the UK sends to the EU, but the relative figures are wildly unbalanced in the EU’s favor.

Theresa May also stated that consumer confidence remains high, but that’s only if you compare it to the pit of the Great Recession. Otherwise, it’s been falling for months as Brexit related concerns have piled up. Meanwhile, the UK has spent nearly a month of the 24 available to write a new deal without sitting down at a negotiating table. 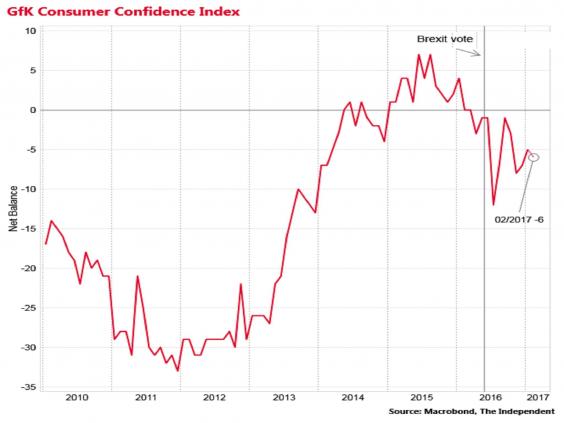 May is now taking her one shot at righting a listing ship, but it’s a fool’s errand. If the Tories lose seats, it will be seen as a vote of no-confidence. (They only have 4 seats more than the minimum needed to control Parliament.) It might even lead to a direct retraction of Article 50. Should the Tories gain seats, they’ll effectively have more rope with which to hang themselves but the amount of rope doesn’t matter much when you’ve placed yourself over an abyss. The only “benefit” of gaining seats would be in having a larger mass of culprits behind the effort, but the result would be the same. Britons would almost certainly be worse off for leaving the UK.  There’d just be more of them rolled in the stink of it.

This presents an unexpected opening for the opposition. Labour needs to decide what they’re for and start shouting it from the rooftops. They might even get together with the Lib Dems and the SNP (and the Greens, etc.) and work on a coordinated campaign for “Anyone but the Tories,” although the first past the post system might make that difficult without candidates stepping down from the race. Barrister Jolyon Maugham presented an interesting decision tree for wavering voters aimed at giving agency back to the voters at the end of the Brexit negotiations. Another plan has already laid out the best odds for different parties by voting district.

How should you vote in this year's General Election? pic.twitter.com/xgRGEBMLG5

Polling has been very bad for Labour over the past year, so they may not be able to rally the sort of votes that are needed, but they have to give it everything now.  Here’s hoping Jeremy Corbyn has been doing a rope-a-dope all these months and that he’ll be able to find common cause with Nicola Sturgeon (SNP), Tim Farron, and others.

Given that, May’s move is likely defensive. By calling the election now, she may lock in five more years of (largely despised) Tory rule. The last general election netted the Tories 50.8% of the seats on 36.8% of the votes. Current polling has them around 42% of the votes. The plan is likely to lock up those votes now before the real mess of Brexit becomes obvious. The claim about the banking and medicine agencies is the first volley in another disinformation war. Let’s hope Labour learned their lesson from the last one.