The Economy is Rigged, and Other Campaign Truths

In, “The Economy is Rigged, and Other Presidential Campaign Myths,” Harvard Economist Gregory Mankiw took to the pages of the NYT’s Upshot to dispel what he saw as some election-related myths. He was attempting to tackle some of Trump’s whoppers (an effort I’m certainly in favor of), but there are claims that I felt I needed to contest. I’ve posted Prof Mankiw’s arguments (highlighting the bits that I focused in on) and responded to them below. Let me know what you think in the comments, or maybe just bust my chops on Twitter.

The presumptive Republican nominee, Donald J. Trump, says, “We don’t make things anymore.” Judging from the surprising success of Mr. Trump’s campaign, this theme apparently resonates with many voters. But it is just not true.

When do you think manufacturing output reached its peak in the United States? The answer: right now. Manufacturing output achieved a record high in the most recent quarter of data. The nation’s manufacturers are now producing 47 percent more than they did 20 years ago.

What has declined is manufacturing employment, which is 29 percent lower than it was 20 years ago. Producing more output with fewer workers is called higher productivity, which in turn is driven by technological innovation. This change is hard on displaced workers, but it is good for the economy over all. Rising living standards are possible only if productivity increases.

Yes, we’re producing more “stuff” in terms of the overall economic value of the products, but what those who are not well off care about are the high paying jobs that manufacturing once provided. With 29% fewer jobs to go around in a static country we’d have a pretty nasty hit, but this ignores population changes. We’ve grown nearly 20% in that time–added over 50 million people to the country–while reducing the total number of manufacturing jobs by close to 5 million. Think of the challenge this creates for the remaining workers as far as negotiating leverage (or better as the lack thereof). Check out the gap between wages and productivity over that time frame in the chart below.

Gee, Wally. Why wasn’t this addressed in the Upshot piece? As a side note, we were approaching 20 million workers in the sector when the Reagan/Thatcher era began. Now we’ve barely got 12 million jobs there. It would be interesting to see the change in median wages for the sector, as well as the breakout by age groups, and the changes in benefits as well. I think we could all guess where those have headed.

Bad trade deals are what ails the economy.

Mr. Trump says he would negotiate better trade deals. Bernie Sanders brags about voting against the trade deals of the past. Hillary Clinton has split with President Obama and withdrawn her support for the Trans-Pacific Partnership.

The experts have a different view. Among those who devote their lives to studying the economy, there is a broad consensus about the overall benefits of free trade and trade deals. Of course, trade hasn’t been a boon for people who have lost their jobs because of foreign competition. But in 2014, the University of Chicago’s IGM Panel surveyed prominent economists about whether “past major trade deals have benefited most Americans.” A few respondents were uncertain, but most said yes. Not a single economist responded in the negative.

Here there’s a bit of mild conflation for the sake of supporting the argument. Yes, the “consensus” was in the affirmative, but let’s take a closer look. First, it’s a poll (and not a scientific study) that’s put on by the University of Chicago, the bastion of Freshwater economists, so we might expect a little bias. While 85% of the respondents fell in line with the consensus, only 16% of them felt that they Strongly Agreed with that statement. This leaves 69% of respondents stating that they “Agreed” with the statement. These are the only two buckets that are not in the negative or neutral, so anyone who thought that this had been the least bit beneficial fell into the “Agreed” bucket, although they do have weightings which suggest that the consensus was a bit stronger than that. But the typos and related errors in the comments section further suggest that these are things that some of the respondents may not spend a lot of time or thought on. (One respondent rated his certainty at 7 (out of 10) for his response of being “Uncertain,” so he was fairly certain about his uncertainty.) In addition to that, many of the those who said they agreed with the statement expressed concerns about whether broad gains were not leaving some short-changed (as the EPI chart above shows). Here are their comments.

The economy is rigged.

To be sure, we live in challenging times. Meager growth and rising inequality have resulted in stagnant incomes for much of the working class and declining incomes for those with the lowest levels of education.

But to say that the economy is rigged, as Mr. Sanders and Mrs. Clinton have done, assumes that some small group of oligarchs planned this outcome. Clearly, the wealthy and powerful try to protect their interests, and they sometimes succeed. But the economy is a complex, decentralized system. Many outcomes are under no one’s control.

Technological change, for instance, is an emergent process reflecting the decisions of thousands of engineers and entrepreneurs. Growth slows when the pace of innovation falls below historical norms. Inequality rises when the innovations that do occur are used by skilled workers and replace unskilled workers. Such skill-biased technological change, as economists call it, is widely considered a leading cause of the increasing inequality the United States has experienced in recent decades.

While we’d be justifiably angered if we learned of collusion among certain actors to pervert the economy (and, well, haven’t we?), the important point here is that coordination doesn’t need to exist for a group of actors to behave in ways that pervert the economy. Monopolies are on the rise, and one study recently found wealthy Americans are so heavily influencing politics as to make the country an oligarchy. It’s not so much about control, but rather about influence. In an emergent system, where the ground is constantly shifting, it doesn’t take many people to push the big levers in ways that leave the playing field uneven.

The rich don’t pay much in taxes.

In an era of great inequality, it is natural for politicians to demonize the rich. And some top earners don’t pay enough in taxes, such as the hedge fund and private equity crowd that benefits from the tax treatment of carried interest.

But don’t confuse these exceptions, even if they are glaring ones, with the general rule. The Congressional Budget Office estimates that under the 2013 tax law, which is still in effect today, the top 1 percent pays 33 percent of its income in federal taxes. By contrast, the middle class (defined here as the middle three-fifths of the income distribution) pays only 13 percent of its income in federal taxes.

Here I have more questions than answers.

First, is it an exception, or rather the rule, that as you go up the income scale you eventually hit a point where the average income tax rates go down? Next, is the highest marginal tax rate during the prosperous years of the mid-20th century the exception, or is it the massive decline in said since 1980?

Finally, is the long run trend of corporate tax rates exceptional, or should we consider that the normal progression of things, and therefore prepare ourselves for effective tax rates that are negative (Circumstances where we’d pay them for operating businesses). That sounds crazy, right? Well, in 2014 eleven firms in the Standard & Poor’s 500 Index (all profitable firms) did not pay income tax in 2014, and another forty-three firms on the same index were partially exempt. Of those fifty-four firms, most received refunds in 2014. In addition to that, the chart below overstates the effective tax rates as it ignores the effects of profits that are “legally” parked offshore in havens. 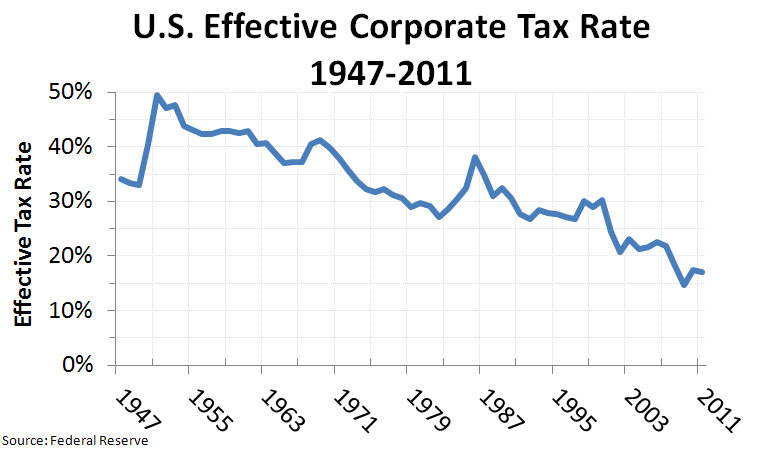 Corporate “scofflawism,” and preferential treatment of the wealthy, both contribute greatly to the U.S.’ spot in the chart below. Again, this ignores the effects of tax havens. This is why we don’t have nice things. 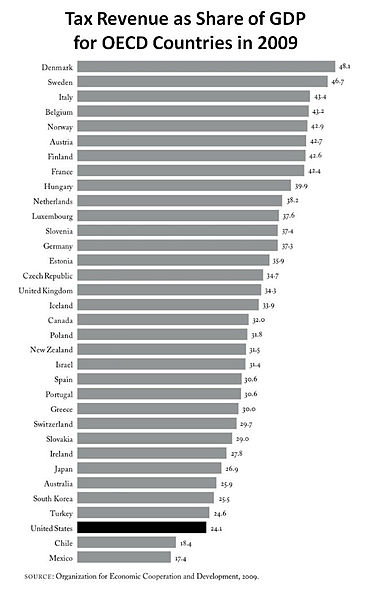 I’m passing on the last two points as I mostly agree with the argument made around tax cuts not being able to unleash growth, and the idea that the next president could quickly fix all that ails us, well, anyone who believes that’s possible might be interested in a little something I have for sale. I can make one heckuva deal…

The Brooklyn Bridge is for sale. Attractive pricing and financing available. Very classy.