Is College a Gamble?

I read a Fast Co. article by Gregory Ferenstein last week, “What College Degrees Are Really Worth,” which shared information on median earnings by major group. (Displayed in the image below.)  As someone who is working on a second masters, in a down and highly uncertain economy, the article got the wheels turning and eventually led to this post. The following chart from the College Board shows the inflation-adjusted changes in tuition in fees for public and private 4-year schools, and public 2-year schools.  On average, the price has roughly tripled over the past thirty years.

It may depend on timing.  The following graph charts unemployment data over the past thirty years.  Pay close attention to the most recent years.  The data itself isn’t surprising, but I still found this alarming.

The next chart shows wage growth (or lack thereof) over the past fifty years.  I’m not familiar with the source, but it seems to pass the reasonableness test.  If the data is correct, we have entered an extended phase of negative wage growth.

In pure economic terms, this means that the graduates of thirty years ago paid 1/3 of the cost when compared with today’s graduates and subsequently received thirty years of wage gains.  Today’s grads are saddled with much more debt at a time when average wage growth does not appear imminent.   The following graph, from the Cleveland branch of the Federal Reserve, shows consumer sentiment aligns with this assertion.

Downward pressure on wages partly stems from the rising costs of healthcare as shown in the next graph.  These costs are likely trending up even faster today as insurers have used the recent healthcare reform measures as an opportunity to renegotiate contracts with employers.

This last graphic shows the breakdown of occupations of the top .1% and 1%.  If you’re fortunate enough to land an opportunity at this level, you should be able to pay down your student loans.  Outside of these ranks, the outcome is less certain.

Andrew Jenks created the following video to draw attention to the growing problem of college debt in America.  The debt burden placed on many of these students is well in excess of $100,000.

The current climate of high unemployment, downward wage pressure, inflation and record corporate profits cannot be maintained for long.  These circumstances will slowly nudge the public towards bankruptcy and debt slavery.  Conditions will eventually improve, or we will collectively demand a change to the status quo which will create more favorable opportunities for the masses.

Taking on debt to finance an education may seem risky, but opting out seems even less appealing.  I’d suggest doing your homework going in, so that you have an idea of what you are getting yourself into.  If nothing else, you may find comfort in knowing that your circumstances will likely be better that those of us who graduated in December of 2008, as Wall Street’s collapse threatened to implode the global economy.  At worst, you’ll at least have a more realistic expectation of the situation you’ll face.  Whatever you do, I advise doing everything you can to increase your education and skill set as the modern economy is proving largely unfavorable to those who do not.

The article provides data on the worsening situation for college grads.  The graphic below shows just how bad this has gotten. 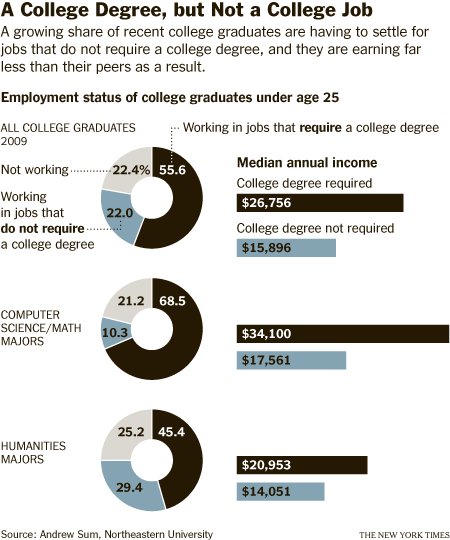 One final note and then I’ll put this post to bed.  Steve Katz, publisher of Mother Jones, shared the following note this evening:

Thirty years ago UC received 9% of the state budget and prisons 3%.  Now UC gets 3% and the prison-industrial complex gets 9%.  The legislature is taking the money that should be used to educate the best of its citizens and using it enrich the people who make a profit from the imprisoning the poorest.

I’ve no source on these figures, so you’ll have to judge their validity for yourself.  If it is accurate, the prognosis is not good.