The Key to Tackling Extremism is Despair?!

I was reading an interesting academic article on the causes of terrorism earlier this week, that was looking for ways to reduce the incidence of suicide bombings. The study (I can’t find the link now, but will try to find it and add it here later.) suggested that the causes are varied and complicated. We can try to tease out contributing factors, but each individual’s circumstances are different, so  trying to pin down specific causes is difficult, if at all possible.

While the causes are likely varied and complicated, as the study suggested,  one thing that came to mind which I think is likely fairly common, despair-the absence of hope. Despair is not a cause, it’s a response-a state of mind. I’m no expert on the subject, but it seems likely that to forfeit one’s life in such a way would likely spring forth from despair. (Maybe I’m wrong, but that’s where my thinking currently is.)

It was with that in mind that I came across the following graphic from the World Economic Forum. 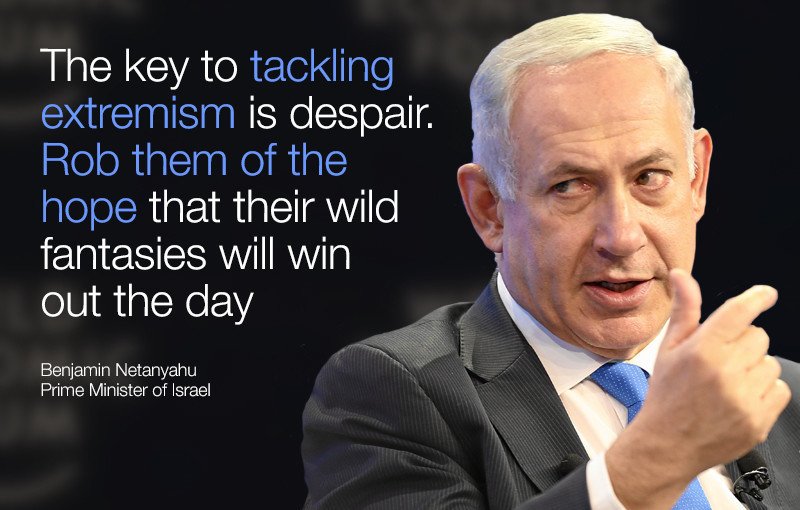 The key to tackling extremism is despair. Rob them of the hope that their wild fantasies will win out the day: @netanyahu #wef

I found this message to be distressing as I fear the goal is to foment, rather than obviate, extremism. And that the WEF, the organization that’s “committed to improving the state of the world by engaging business, political, academic, and other leaders of society to shape global, regional, and industry agendas,” would not only provide a forum for this message, but also trumpet it, is horrifying. Mr. Netanyahu would surely claim that his message was aimed at those who are aiming to do such acts, but that’s a group that’s ever adding new members to its number. I wonder, why is that?